Here at Mozilla, we’ve accepted that a certain amount of intermittent failure in our automated testing of Firefox is to be expected. That is, for every push, a subset of the tests that we run will fail for reasons that have nothing to do with the quality (or lack thereof) of the push itself.

On the main integration branches that developers commit code to, we have dedicated staff and volunteers called sheriffs who attempt to distinguish these expected failures from intermittents through a manual classification process using Treeherder. On any given push, you can usually find some failed jobs that have stars beside them, this is the work of the sheriffs, indicating that a job’s failure is “nothing to worry about”: 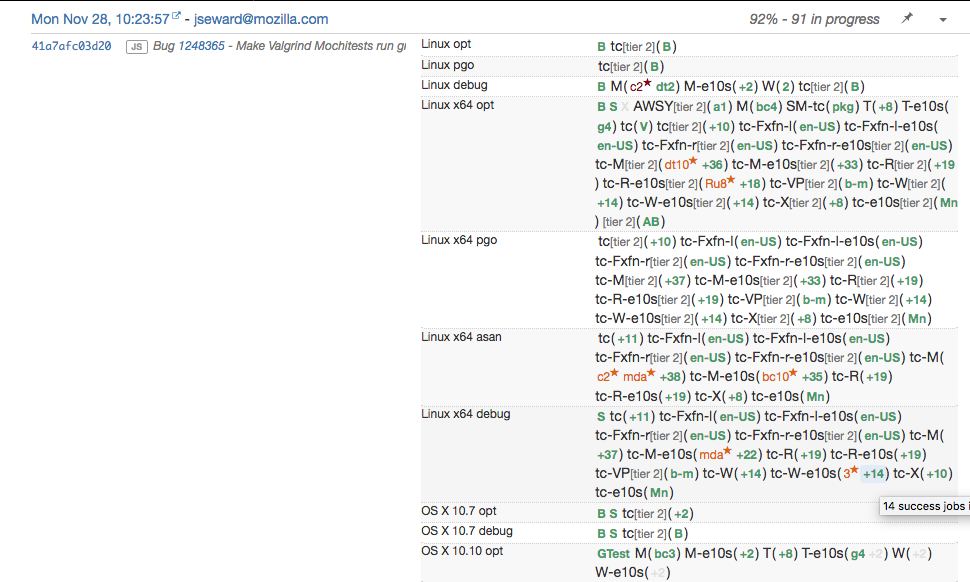 This generally works pretty well, though unfortunately it doesn’t help developers who need to test their changes on Try, which have the same sorts of failures but no sheriffs to watch them or interpret the results. For this reason (and a few others which I won’t go into detail on here), there’s been much interest in having Treeherder autoclassify known failures.

We have a partially implemented version that attempts to do this based on structured (failure line) information, but we’ve had some difficulty creating a reasonable user interface to train it. Sheriffs are used to being able to quickly tag many jobs with the same bug. Having to go through each job’s failure lines and manually annotate each of them is much more time consuming, at least with the approaches that have been tried so far.

It’s quite possible that this is a solvable problem, but I thought it might be an interesting exercise to see how far we could get training an autoclassifier with only the existing per-job classifications as training data. With some recent work I’ve done on refactoring Treeherder’s database, getting a complete set of per-job failure line information is only a small SQL query away:

Just to give some explanation of this query, the “bug_job_map” provides a list of bugs that have been applied to jobs. The “text_log_step” and “text_log_error” tables contain the actual errors that Treeherder has extracted from the textual logs (to explain the failure). From this raw list of mappings and errors, we can construct a data structure incorporating the job, the assigned bug and the textual errors inside it. For example:

Some quick google searching revealed that scikit-learn is a popular tool for experimenting with text classifications. They even had a tutorial on classifying newsgroup posts which seemed tantalizingly close to what we needed to do here. In that example, they wanted to predict which newsgroup a post belonged to based on its content. In our case, we want to predict which existing bug a job failure should belong to based on its error lines.

There are obviously some differences in our domain: test failures are much more regular and structured. There are lots of numbers in them which are mostly irrelevant to the classification (e.g. the “expected 12 pixels different, got 10!” type errors in reftests). Ordering of failures might matter. Still, some of the techniques used on corpora of normal text documents for training a classifier probably map nicely onto what we’re trying to do here: it seems plausible that weighting words which occur more frequently less strongly against ones that are less common would be helpful, for example, and that’s one thing their default transformers does.

In any case, I built up a small little script to download a subset of the downloaded data (from November 1st to November 23rd), used it as training data for a classifier, then tested that against another subset of test failures between November 24th and 28th.

With absolutely no tweaking whatsoever, I got an accuracy rate of 75% on the test data. That is, the algorithm chose the correct classification given the failure text 1312 times out of 1959. Not bad for a first attempt!

After getting that working, I did some initial testing to see if I could get better results by reusing some of the error ETL summary code in Treeherder we use for bug suggestions, but the results were pretty much the same.

So what’s next? This seems like a wide open area to me, but some initial areas that seem worth exploring, if we wanted to take this idea further:

If you’d like to experiment with the data and/or code, I’ve put it up on a github repository.