As part of the Stockwell project, I’ve been hacking on ways to make it easier for developers to diagnose failure of our tests in automation. It’s often very difficult to reproduce an intermittent failure we see in Treeherder locally since the environment is so different, but historically it has been a big hassle to get access to the machines we use in automation for various reasons.

One option that rolled out last year was the so-called one-click loaner, which enabled developers to sign out an virtual machine instance identical to the ones used to run unit tests (at least if the tests are running on Taskcluster, which is increasingly often the case), then execute their particular case with whatever extra debugging options they would find useful. This is a big step forward, but it’s still quite a bit of hassle, since it requires a bunch of manual work on the part of the developer to interact with the instance.

What if we could just re-run the particular test an arbitrary number of times with whatever options we wanted, simply by clicking on a few buttons on Treeherder? I’ve been exploring this for the first few months of 2017 and I’ve come up with a prototype which I think is ready for people to start playing with.

The user interface to this is pretty straightforward. Just find a job you want to retrigger in Treeherder:

Then select the ’…’ option in the panel below and press “Custom Action…”: 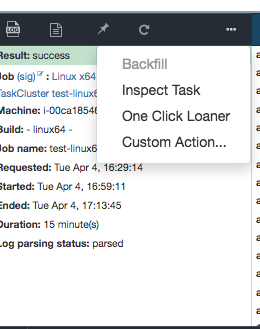 You should get a small piece of JSON to edit, which corresponds to the configuration for the retriggered job: 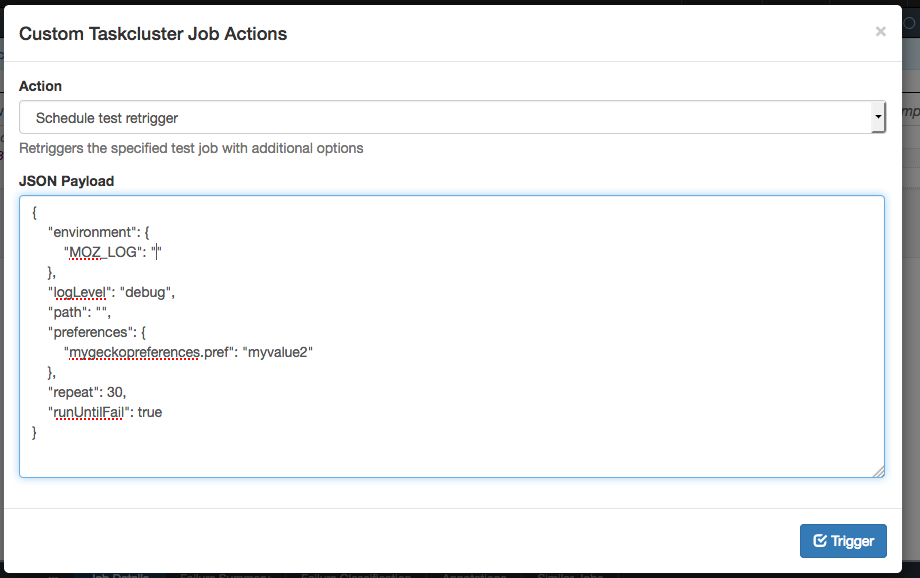 The main field to edit is “path”. You should set this to the name of the test you want to try retriggering. For example dom/animation/test/css-transitions/test_animation-ready.html. You can also set custom Firefox preferences and environment variables, to turn on different types of debugging.

Unfortunately as usual with a new feature at Mozilla, there are a bunch of limitations and caveats:

Aside from fixing the above limitations, the following features would also be really nifty to have:

I am actually in the process of moving to another team @ Mozilla (more on that in another post), so I probably won’t have a ton of time to work on the above — but I’d be happy to help anyone who’s interested in developing this idea further.

A special shout out to the Taskcluster team for helping me with the development of this feature: in particular the action task implementation from Jonas Finnemann Jensen that made it possible to develop this feature in the first place.