For the last year, we’ve been gradually migrating our backend Telemetry systems from AWS to GCP. I’ve been helping out here and there with this effort, most recently porting a job we used to detect slow tab spinners in Firefox nightly, which produced a small dataset that feeds a small adhoc dashboard which Mike Conley maintains. This was a relatively small task as things go, but it highlighted some features and improvements which I think might be broadly interesting, so I decided to write up a small blog post about it.

Essentially all this dashboard tells you is what percentage of the Firefox nightly population saw a tab spinner over the past 6 months. And of those that did see a tab spinner, what was the severity? Essentially we’re just trying to make sure that there are no major regressions of user experience (and also that efforts to improve things bore fruit): 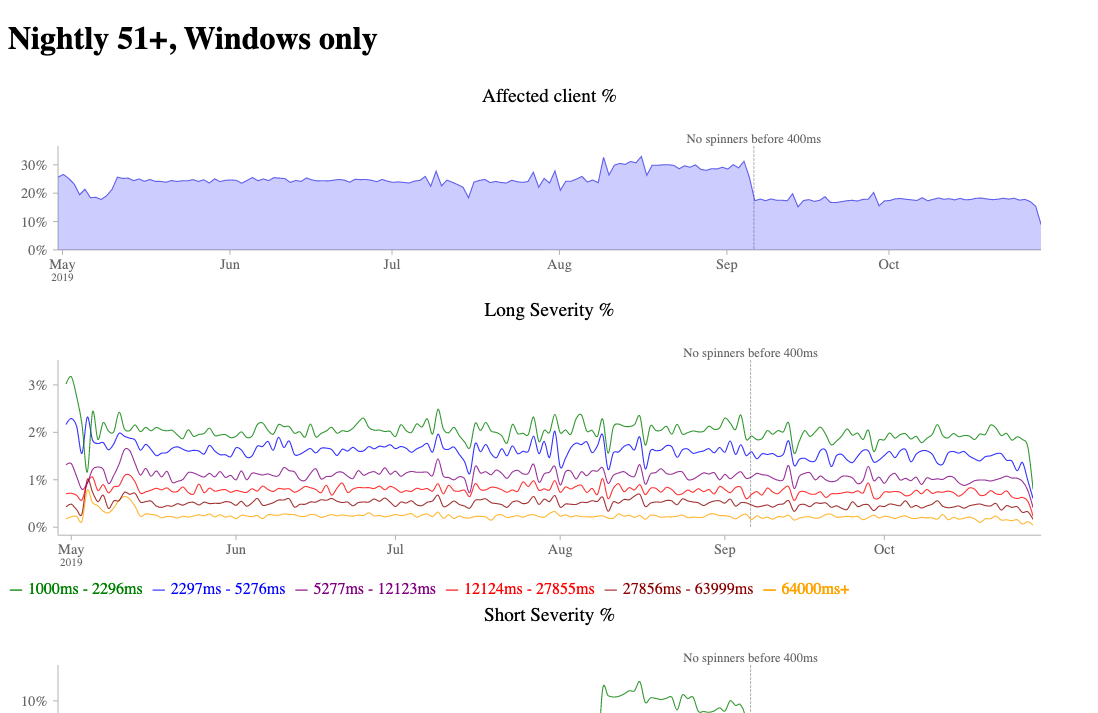 Pretty simple stuff, but getting the data necessary to produce this kind of dashboard used to be anything but trivial: while some common business/product questions could be answered by a quick query to clients_daily, getting engineering-specific metrics like this usually involved trawling through gigabytes of raw heka encoded blobs using an Apache Spark cluster and then extracting the relevant information out of the telemetry probe histograms (in this case, FX_TAB_SWITCH_SPINNER_VISIBLE_MS and FX_TAB_SWITCH_SPINNER_VISIBLE_LONG_MS) contained therein.

The code itself was rather complicated (take a look, if you dare) but even worse, running it could get very expensive. We had a 14 node cluster churning through this script daily, and it took on average about an hour and a half to run! I don’t have the exact cost figures on hand (and am not sure if I’d be authorized to share them if I did), but based on a back of the envelope sketch, this one single script was probably costing us somewhere on the order of $10-$40 a day (that works out to between $3650-$14600 a year).

With our move to BigQuery, things get a lot simpler! Thanks to the combined effort of my team and data operations[1], we now produce “stable” ping tables on a daily basis with all the relevant histogram data (stored as JSON blobs), queryable using relatively vanilla SQL. In this case, the data we care about is in telemetry.main (named after the main ping, appropriately enough). With the help of a small JavaScript UDF function, all of this data can easily be extracted into a table inside a single SQL query scheduled by sql.telemetry.mozilla.org.

In addition to being much simpler, this new job is also way cheaper. The last run of it scanned just over 1 TB of data, meaning it cost us just over $5. Not as cheap as I might like, but considerably less expensive than before: I’ve also scheduled it to only run once every other day, since Mike tells me he doesn’t need this data any more often than that.

[1] I understand that Jeff Klukas, Frank Bertsch, Daniel Thorn, Anthony Miyaguchi, and Wesley Dawson are the principals involved - apologies if I’m forgetting someone.