It’s kind of rare for me to pimp out products and services on my blog, but I’m going to do so just this once.

I really despise faxes, but occasionally I do have to send them in the course of some of the admin work I still do on the side for my old consulting company (address changes, etc.). If you’re in a similar boat, you really owe it to yourself to check out hellofax.com. It’s about three gazillion times better than any other similar service that I’ve tried (which were all embarassingly bad: I’d sooner just go to a copy shop) and has saved me hours and hours of time and frustration.

Because I don’t have enough spare time projects (this is a joke), I decided to take on the task of adding a must-requested special iPhone/iPod-touch friendly view for the WifiDog authentication server (used by the infamous Île Sans Fil) after being inspired by the WifiDog camp held a few weeks ago at Station C. I finally finally finished up a prototype today. It’s a bit of a hack, but a relatively clean one: hopefully some version of it can be integrated into trunk, and users with mobile devices will have a better experience when they’re on the go in Montréal (or any other area with a community-oriented wifidog deployment: I hear there’s lots). 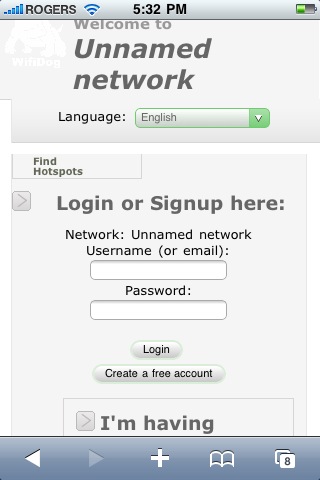 For those interested in grubby details, you can track the progress of this work on the WifiDog ticket tracker.

Started to use a new piece of hardware at the Navarra office today, which resulted in the following gem being added to the GNOME notification area. Would anyone care to guess what the following icon is supposed to represent?